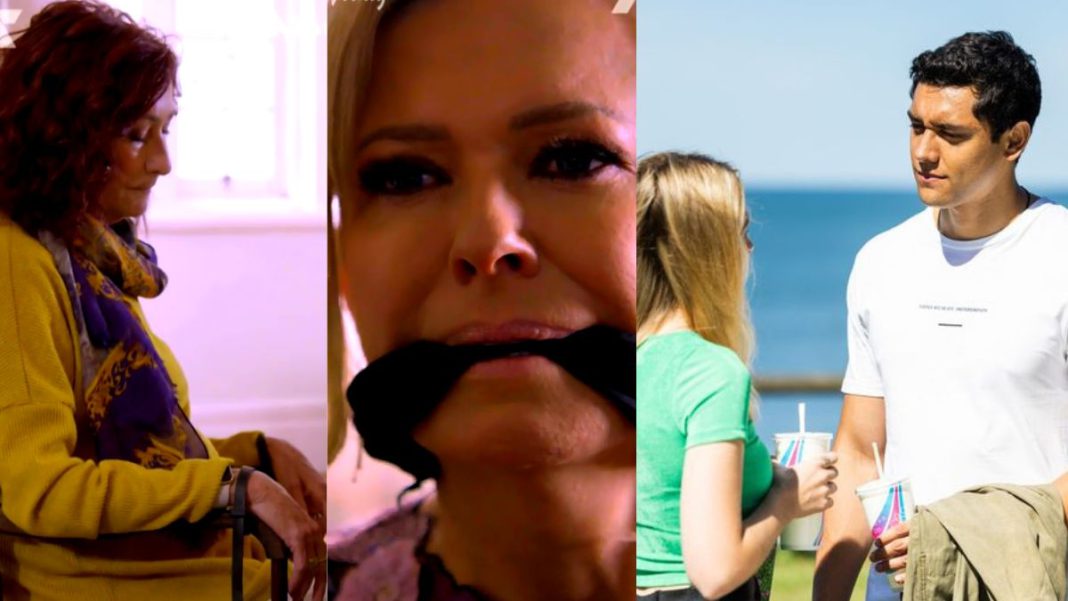 Next week on Home and Away, Kirby and Theo finally go public with their relationship.

Elsewhere, the truth about Heather’s identity is revealed, and Nikau finds himself caught up in the drama.

Here’s a full collection of 11 big moments coming up.

Kirby is shocked as Theo ends their relationship

After Kirby advises him to kiss another woman to confuse Remi, Theo starts to have second thoughts about his covert relationship with her. He advises that they simply tell Remi and Eden the truth, but Kirby again rejects the idea.

Theo decides it’s time to put an end to the games, so he surprises Kirby by telling her their relationship needs to end.

Remi and Eden are perplexed by the unusual vibe at Lyrik’s most recent band meeting in the wake of Theo and Kirby’s covert separation. Theo attempts to defend Kirby by offering an explanation and accepting responsibility.

Kirby ultimately gets over her hesitations and draws Theo in for a kiss in front of Remi and Eden because she is touched that he would defend her despite their previous disagreements.

Even though Remi and Eden are taken aback, they choose to maintain harmony in Lyrik by lending Kirby and Theo their support.

After a brief excursion, Ziggy returns to Summer Bay and declares that she has won the most recent surfing contest. She walks to the beach to enjoy a casual surf to celebrate, but she soon feels dizzy and stumbles back.

Bree, Summer Bay’s new medical professional, examines Ziggy on the sand and speculates that she might be expecting.

Ziggy brushes this off, but when she gets home she takes a test and is astonished when the results are positive.

Despite keeping the test results to herself, Dean observes Ziggy’s apparent mood change. When Ziggy indicates that she might give up on her goal of becoming a professional surfer, Dean is perplexed.

Ziggy decides to be upfront with Dean about her pregnancy and her concern that having a child may force her to abandon her dream of being a professional surfer. In response, Dean offers encouragement and assures her that they are on the same team.

Marilyn and Roo are still at odds over whether Heather, the newcomer to Summer Bay, can be trusted. By pointing out that Heather once had to give up a kid after having an affair with a married man, Roo defends her new student.

Marilyn, who appears to know something about Heather’s purported past, is concerned by this information.

Later, Marilyn discovers a baby picture and a letter that says, “Guess who?” on her porch.

Marilyn charges Heather with leaving the photo on her porch as she charges over to her mobile home. Nikau and Roo intervene to end their argument when Heather pretended to be innocent.

Later, when Heather has a moment to herself, she pulls out her birth certificate and tells the audience the truth about her hidden objective. Marilyn Chambers is mentioned as her birth mother.

Nikau gets caught up in the Heather drama

After Nikau observed the argument at the campground, Marilyn makes an effort to make peace with him. Taking advantage of the situation, she presses Nikau for information on Heather, but he responds that he doesn’t really know her.

Marilyn loses her patience with Nikau and scolds him for sleeping with a lady he hardly knows and moving on from Bella so rapidly.

Marilyn’s loved ones stage an intervention

Her closest pals are concerned about Marilyn’s most recent outburst because they sense something is amiss.

In an effort to surprise Marilyn with an intervention, Leah and Roo start a fight. When Roo finally decides she’s had enough of Marilyn’s behaviour, she storms off.

Cash is still residing in the Parata residence, but Nikau and Tane are concerned that if he stays there for an extended period of time, the bikies would beat them up for helping the police.

Tane brings up this topic with Felicity, warning her that Cash’s refusal to leave would jeopardise their safety. Without realising that her brother has heard everything she says and is obviously upset, Felicity offers to talk to Cash.

Cash attempts to resolve the situation on his own by planning a move to the RV park. When Felicity discovers him packing, she steps in right away.

Cash is not allowed to leave the Parata home, according to Felicity, who insists that she can keep an eye on him there.

Tane is encouraging, but he begins to lose hope and asks Rose if there have been any developments on the bikies’ court date.

Rose looks over the police investigation into the biker gang that is now going on. She is alarmed to learn that Cash’s life is still in danger because the bikies have ordered a hit on him. Cash scarcely reacts when Rose finally decides to inform him.

Cash shows up at the police station the following day and requests to see the specifics for himself. He is obviously shocked to learn that the hit on his life only cost $10,000. Cash regrettably wonders whether this is all his life is worth.