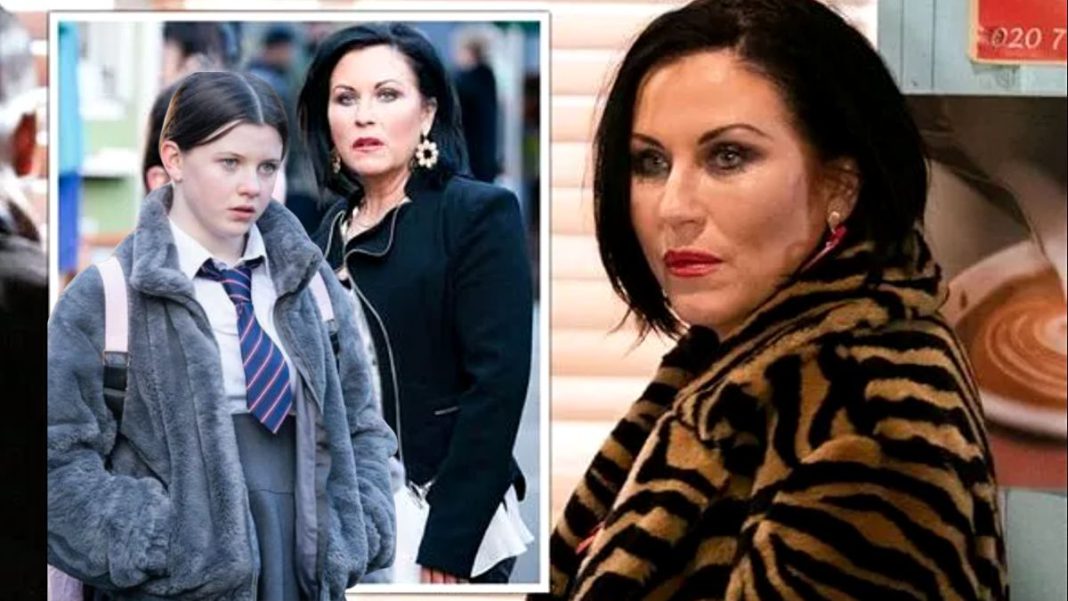 EASTENDERS’ Lily Slater will regret her attempts to make Kat happy when her surprise party backfires. A theory suggests the bride-to-be will be furious when an unwanted guest crashes her celebrations.

Kat Slater (Jessie Wallace), a mainstay character on EastEnders, hasn’t had much to celebrate lately. Life has been difficult for the leopard print Queen of Walford because of Phil Mitchell’s (Steve McFadden) incarceration, his supposed death and subsequent resurrection, and his time in prison.

But the good news of their rekindled love, which was announced to the tune of wedding bells, has given Albert Square’s big-hitting couple cause for joy.

That happiness, however, will quickly change to wrath once an unwanted surprise is given during a pre-wedding party, as is so often the case in the Square.

Lily Slater (Lillia Turner), who is thoughtful and notices that Kat isn’t acting like herself, tries to gently organise a small celebration to cheer her up.

Everything is going according to plan for the last-minute Slater get-together thanks to Big Mo (Laila Morse) providing witty bridal attire.

Maybe the family can anticipate the important day now that Phil and Kat have picked a date for their nuptials?

If only a gathering with the Slater family was that simple.

The ideal engagement present, in Lily’s opinion, is another major surprise for her cousin Kat.

However, the second gift is being regarded much less favourably. What form will this gift take?

Many prominent family members have been absent from Walford for some time in order to attend a major event.

Ahead of their wedding day, Kat cannot believe Lily thought Jean’s arrival would be the smooth, drama-free build-up required for her big day.

One specific individual has the potential to infuriate Kat, especially so close to her wedding day.

It makes sense that the appearance of Shane Richie’s character, former Queen Vic landlord Alfie Moon, at the event would send his ex-wife into a tailspin.

Following his nasty dispute with Phil, the once-cheeky chappy bartender has not been spotted in Walford for three years.

Although Alfie’s return isn’t scheduled until the autumn, Jean Slater’s (Gillian Wright) surprise visit from the hospital to see her family may be more shocking.

Kat and Stacey (Lacey Turner), who have had to cope with the family’s bipolar grandmother, will be unable to contain their rage at Lily for contributing to Jean’s early return.

The future Mrs. Mitchell is aware that caring for Jean will require her to shoulder some responsibilities.

However, a connection with Phil requires enormous amounts of time, effort, and emotional involvement, as many in Albert Square can attest.

On the BBC soap, there are other, unwelcome surprises as well.

it appears Kat will not be the only one who receives an unwelcome greeting next week.

Jay Brown (Jamie Borthwick) also has a nasty surprise. His relationship with Honey (Emma Barton) hangs by a thread after his kiss with Lola Pearce (Danielle Harold).

As gossip spreads like wildfire – with toddler Lexi the main source – news of romance between them lands itself on Billy Mitchell’s (Perry Fenwick) lap.

Honey’s ex reacts in the only way Mitchell knows how and greets Jay with a punch in the face.