Home and Away cast take us backstage at dramatic Heather shoot 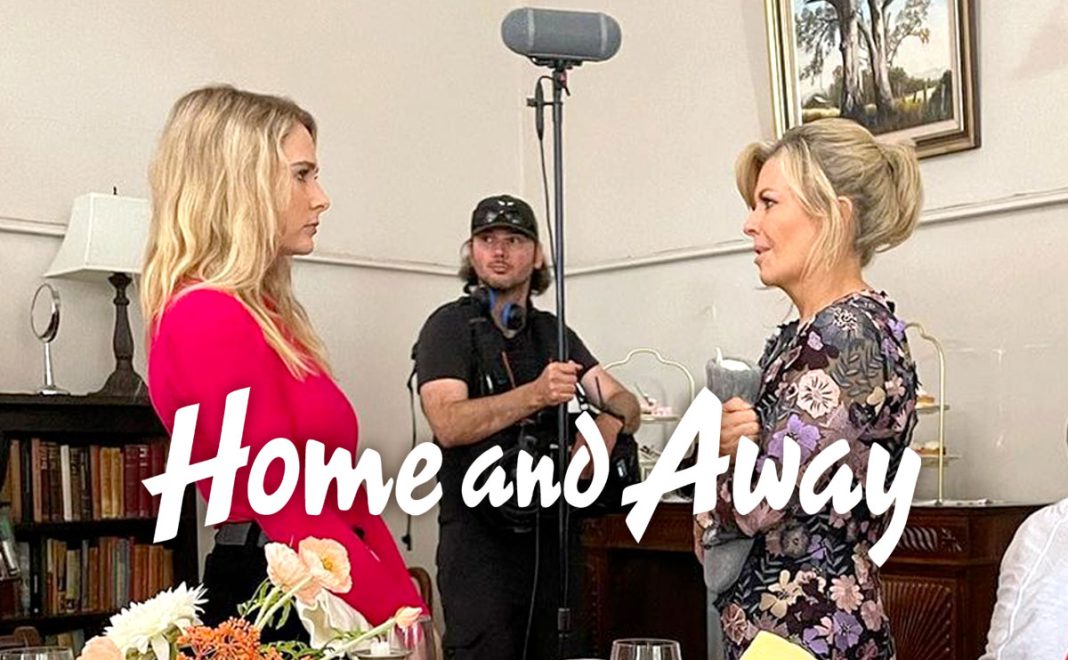 The cast and crew of Home and Away have taken to Instagram to showcase the behind-the-scenes work involved in creating the huge scenes which aired in tonight’s Australian episodes.

In the three-part episode, Heather Frazer (Sofia Nolan), Marilyn Chambers’s hidden child, held several Summer Bay locals captive in an effort to exact revenge on Marilyn for abandoning her when she was a baby.

Marilyn had an affair with Tim, a married man, while she was working as a cleaner while backpacking in 1995. Tim was Marilyn’s boss at the time.

It has come to light that Heather’s adopted mother has always harboured resentment towards Heather and made her life miserable. Tim and his wife persuaded Marilyn to give them the baby, who they then adopted as their own.

After 27 years, Heather has located Marilyn, her birth mother, in Summer Bay. But instead of attempting to connect with her mother, she wanted to get even with her; this desire culminated in tonight’s tragic incidents.

For weeks, the tenseness has been increasing. Despite the fact that Marilyn and Heather have acknowledged one another as mother and daughter, Marilyn has wished for Heather’s true identity to remain private because she was concerned that her friends would never forgive her for maintaining such a significant secret for nearly three decades.

Heather was even more enraged by this, and she has grown increasingly impatient with Marilyn’s popularity in Summer Bay and her friends’ willingness to overlook her transgressions.

Marilyn even accepted responsibility for cutting John’s (Shane Withington) tyres, which Heather did after John started to suspect her. Heather was furious when even that failed to convince Maz’s friends to turn against her.

In the episode that aired on Wednesday and will be seen in the UK in November, Heather went back to Summer Bay and invited Marilyn to a secluded country home, saying she wanted to make apologies with her and her friends.

She suggested to Maz that they host a brunch and invite her closest friends as a way of showing how sorry she was, and to get their forgiveness.

However, she had a dastardly plan.

She used a heavy metal candlestick to knock Marilyn out, and when Ray Meagher’s Alf, Ada Nicodemou’s Leah, Georgie Parker’s Roo, and Lynne McGranger’s Irene arrived at the manor house, she rendered them unconscious by serving them drinks laced with sleeping pills before tying them up in the dining room.

Marilyn was compelled to observe from another room, where Heather had restrained her and placed a TV in front of her, allowing her to see her friends’ misery from a distance.

Alf suffered the most since the poisoned beverage made his underlying heart problem worse. His buddies pleaded with Heather to let him go so he could get to the hospital as his chest tightened and his breathing grew laborious.

Heather made the decision to hold onto her hostages even after Marilyn told her loved ones the truth about her, reasoning that Alf’s suffering would ultimately bring her justice.

The sequences were filmed at Iandra Castle, a sizable farmstead 30 kilometres north of Young in New South Wales’ Central West. The complex is made up of the actual homestead, stables, surrounding gardens and parkland, a chapel, and a cemetery, but the large homestead and its balcony were the centre of the stressful hostage situation.

The ensemble travelled there in May of this year, five hours away from the soap opera’s normal setting in Sydney’s Palm Beach.

A number of the cast took to Instagram shortly before Thursday’s episodes aired in Australia, posting photos from the shoot.

“Had a blast shooting tonights ep of @homeandaway on location at Landra [sic] Castle. See what all the fuss is about tonight on 7 at 7pm. Good luck Marilyn!”

Cash played a big part in the rescue as he and Rose (Kirsty Marillier) raced through the house in search of the trapped residents.

He was also forced to try to talk Heather down as she climbed onto the ledge of one of the homestead’s balconies, before she lost her footing and fell.

“Shot in beautiful Young, tonight’s episode was a challenging, fun, exhausting experience, and we all loved it. Catch it if you can, because ;@emilysymons_ and @sofianolan GO for it 🧡 #iandracastle“

The photos show Emily Symons and Ray Meagher relaxing between takes, as well as Ray taking a photo of Lynne McGranger and Ada Nicodemou.

In Lynne’s pictures, she and Ada may be seen in front of the “Welcome to Young” sign, and the cast is pictured in the dining room in between takes, with Heather’s sumptuous spread in the background.

A series of behind-the-scenes pictures of the cast and crew filming the disturbing sequences were also released by Greg Stone, who oversees the art department on Home and Away.

When a crew member wields a clapperboard before the moment where Marilyn awakens to find herself bound to a chair and when shots are being framed with a crew member standing in for Marilyn, we get to view the scenes from behind the camera.

Matthew Grossman stands in for Marilyn as they frame the shots.

A screenplay is still in Emily Symons’ hands as they perform the scenario, and she sits down on her chair with a bottle of water next to her.

Danny Raco, who previously portrayed Alex Poulos, Leah’s brother, is identified in one of the pictures. Danny is now a show director, and he oversaw the filming at Iandra Castle.

One of the photos also shows Sofia Nolan clutching a hot water bottle, reflecting the fact that filming the Summer Bay drama isn’t always as warm as it appears on-screen.

In addition, Ray Meagher is seen on a stretcher as his character Alf gets ready to be loaded into the back of an ambulance in one of the behind-the-scenes images shared to the platform by Lucy Addario, the show’s series producer.

The drama looks set to continue well into next week, as, despite her loved ones knowing she wasn’t at fault, Marilyn runs away to escape her shame. Will her friends be able to track her down?

Also in the episodes, Dean and Ziggy had their 12-week scan, where they were shocked to discover that Ziggy was in fact already 18 weeks pregnant.

“Looks like we’ll be seeing the grommet a lot sooner than we thought,” Ziggy exclaimed, as they both beamed with happiness.

UK viewers will see these scenes in mid-November.