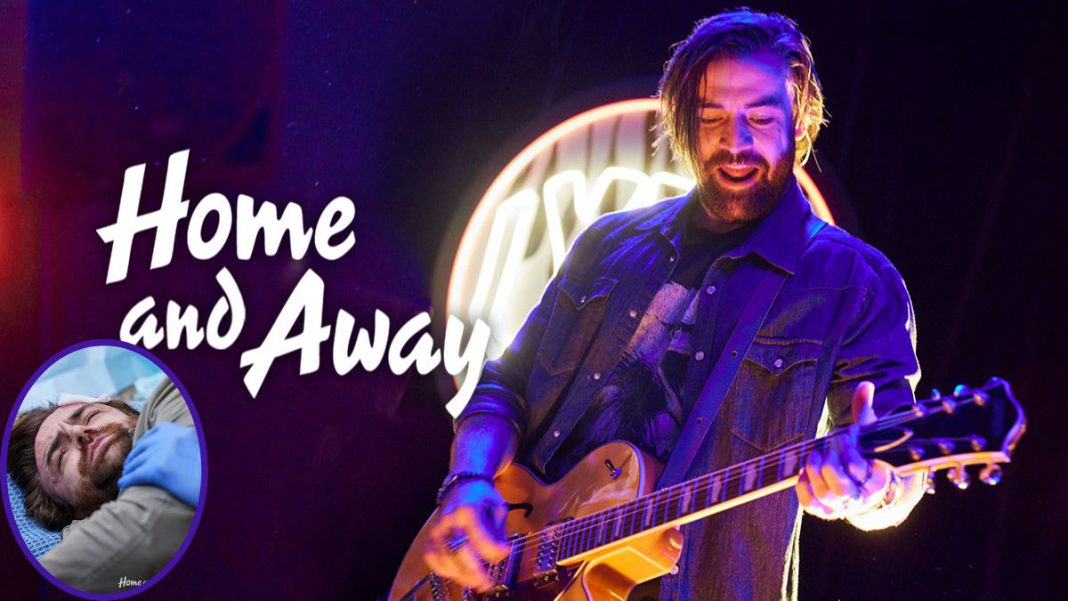 Coming up this week on Home and Away in Australia, Kirby and Theo’s plan to get Lyrik some much-needed publicity backfires, as Remi threatens to quit the band.

Since Bob’s (Rob Mallett) departure, Lyrik have had difficulty promoting themselves.

While they all concur that they are better off without their former lead singer, Kirby, Bob’s ex-girlfriend, does have to admit that he was good at marketing (Angelina Thomson). It’s now up to the remaining band members and new addition Theo (Matt Evans) to land gigs, grow their fan base, and keep the cash coming in.

Kirby noted that a feature in the Coastal News would only be effective “if we want our next gig to be full of pensioners.” Last week, Theo and Kirby decided that their ideas, including calling a local radio station to request that they play their song and getting a gig review in the local paper, weren’t big enough or weren’t going to get them the right type of audience.

It’s nothing compared to the kind of big, attention-grabbing and often controversial stuff Bob used to come up with.

It’s nothing compared to the kind of big, attention-grabbing and often controversial stuff Bob used to come up with.

Theo is eager to note that he once had a sizable internet following, but that he had since deactivated his account. Theo’s tens of thousands of followers were back and available for marketing after Kirby pointed out that he could simply reactivate it.

The duo, whose relationship is now public knowledge, hastily videotaped themselves singing their brand-new song, the one that first prompted them to share a kiss.

Kirby didn’t care if Remi (Adam Rowland) and Eden (Stephanie Panozzo) weren’t present because she needed the footage up online right away and they weren’t picking up their phones.

Theo was worried about getting the other band members offside, so double then triple-checked with Kirby that they were doing the right thing.

“Wait, just to check one last time… you are sure that Eden and Remi are going to be okay with us uploading this without them in it?” he asked. “And they won’t have a problem that it’s going on my channel instead of the official Lyrik one?”

Kirby encouraged him to stop second-guessing it and just share the video, telling him that getting them in front of 50,000 people was the finest PR they could hope for, and that the band’s social media accounts paled in contrast to Theo’s.

“Trust me,” she assured him. “Eden and Remi will be stoked!”

Their strategy was successful. Within a few hours, almost 2000 of Theo’s admirers had viewed and shared his new professional move.

It didn’t take Theo and Kirby long to become the hottest couple on the internet, and attention soon followed.

They immediately received a direct message (DM) from Tully Dixon, a music reviewer for the website Music World, who seemed to be a big deal. Theo, who is familiar with the internet, thought it might be a fake, but Kirby convinced him that the man’s account was confirmed – he’s the real deal!

The only issue was that Tully was already nearby and wanted to conduct the interview right then!

This week, the hour passes quickly, and Theo and Kirby scramble to get the entire band in one spot before the significant reviewer shows up.

Unfortunately, there’s just not enough time, and the pair are forced to start the interview before they can get hold of Eden and Remi.

They eventually run into their comrades when Eden and Remi return to the group’s new home on Saxon Avenue, but the interview has already ended by that point. Kirby barely has time to introduce the group to Tully before he quickly leaves.

Kirby and Theo can’t keep the smiles off their faces – if Tully publishes the interview in Music World, they’ve got the band the publicity they’ve been dreaming of!

It’s safe to say, though, that the band’s guitarist and bassist are not at all pleased about missing out on their biggest interview to date.

Even the usually calm Eden is about to lose her temper, frostily telling Kirby, “we should have done it together.”

However, Kirby insists that when a career-making journalist squeezes you in last minute, “you don’t stuff ’em around,” implying that they couldn’t simply have turned him down and rearranged for another day.

Theo tried to explain that they tried to stall him, but, at least for Remi, it falls on deaf ears.

As he and Eden chat later, Remi refuses to believe Theo’s story, telling her, “we’ve only known this guy for a couple of weeks, and he’s already gone behind our back with Kirby!”

It appears Remi has another idea when Eden, who believes Theo when he says he tried to stall the journalist, tells him that they can’t exactly oust their new lead singer right away.

“Maybe I’m the one who has to leave.”

With Lyrik having already lost one member since their arrival in Summer Bay, are they about to lose a second?

And the drama doesn’t end there…

Given that Remi ended up in the hospital this week after falling outside the surf club, it appears that Theo and Kirby talking behind his back are the least of his worries this week.

It seems that Theo and Kirby chatting behind his back are the least of his problems this week given that Remi wound up in the hospital this week after tripping outside the surf club.

However, he’s about to be put in his place as the new doc reveals something she’s kept very much under wraps until now… she’s married!