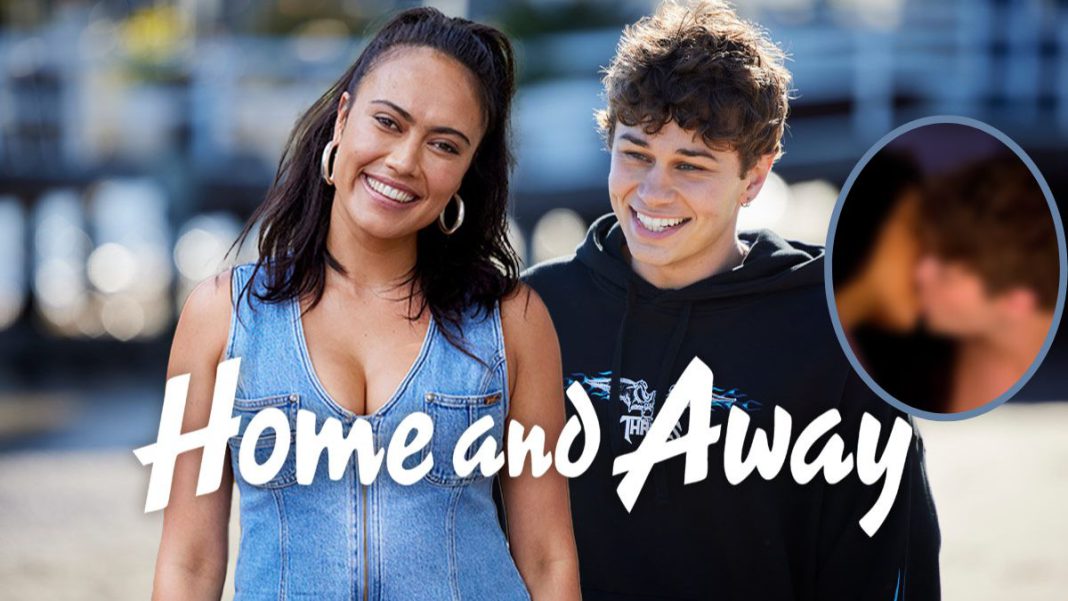 Coming up this week on Home and Away‘s return to Australian screens, Theo joins Lyrik for his first gig away from Summer Bay, and soon finds a surprise romantic connection with Kirby.

As the new lead vocalist of the band Lyrik, Theo (Matt Evans) is living the dream. Since his father Dimitri (Salvatore Coco) destroyed his guitar when Theo was a teenager, Theo was forced to repress his lifelong passion of music.

Theo has been able to reignite his passion for music since moving in with his aunt Leah (Ada Nicodemou) and her partner Justin (James Stewart). Justin even gave Theo his extra guitar with the assurance that music will always be accepted in their home.

When offered a regular engagement at Salt, Bob decided to leave Lyrik and his girlfriend Kirby behind and head off in the band’s van since he thought that staying in Summer Bay would only limit his abilities. The group had a big gap to fill as they had already agreed to the gig!

Theo was prompted by Justin to audition, and after impressing everyone with his guitar and vocal abilities, he was given the position right away, much to the displeasure of his new mentor Ziggy (Sophie Dillman).

Ziggy intervened to save the day after Justin unintentionally removed himself from Theo’s apprenticeship and gave up a planned vacation to do so. Naturally, she was concerned that becoming the lead vocalist of a band would take up crucial workshop time after spending a lot of time planning a work schedule for Theo.

Theo was finally asked about this by Justin after learning that the band will also be travelling up and down the coast. After discussing the situation with Kirby, who believed Theo would regret quitting music, Theo made a commitment to try to maintain both jobs.

Despite everything, Theo is still hurting from his breakup with Chloe. Chloe avoided giving Theo any information since she knew that telling him where she was wouldn’t be safe. Tane (Ethan Browne) had taken her to New Zealand for her own security when the family came under threat from a biker gang.

Theo’s demands for information only resulted in the two splitting up since he got tired of hearing Chloe’s evasive explanations about her family issues.

She convinced him that writing out his emotions into a new song would be the best way to deal with his broken heart while his new bandmate Kirby was around.

Theo performs his first show away from Summer Bay this week as the band travels. Theo has a lot of potential, and songwriter Kirby invites him to join them for dinner as a post-gig debrief.

But when Eden and Remi decide to go out instead, Kirby and Theo find themselves alone for the evening and quickly discover they have a lot in common.

“The band took on the stressful job of finding a new lead singer, and were taken aback when Theo walked through the door,” Angelina told TV Week. “Kirby and Theo’s mutual passion for music is a deep connection.”

The two spend the evening composing and jamming together, and before they realise it, morning has arrived. Theo and Kirby are jubilant since they’ve finished writing a new song while Justin is wondering where Theo has been all night.

As the two go in for a hug, there’s a moment where sparks begin to fly… and all of a sudden, the pair are kissing.

Is there a new inter-band relationship on the cards already, or are the two simply on the rebound?

Also coming up this week, who is shot?

A promo released at the time gave a sneak peek at the chaos that will ensue this week, with one resident left fighting for their life as a police operation goes horribly wrong!Read More

Plus, baby surprises for Ziggy and Marilyn!

A further promo has also teased further storylines to air in the coming weeks, with Ziggy learning that she’s pregnant, and a secret from Marilyn’s past apparently coming back to haunt her—does she have a secret child? Read More