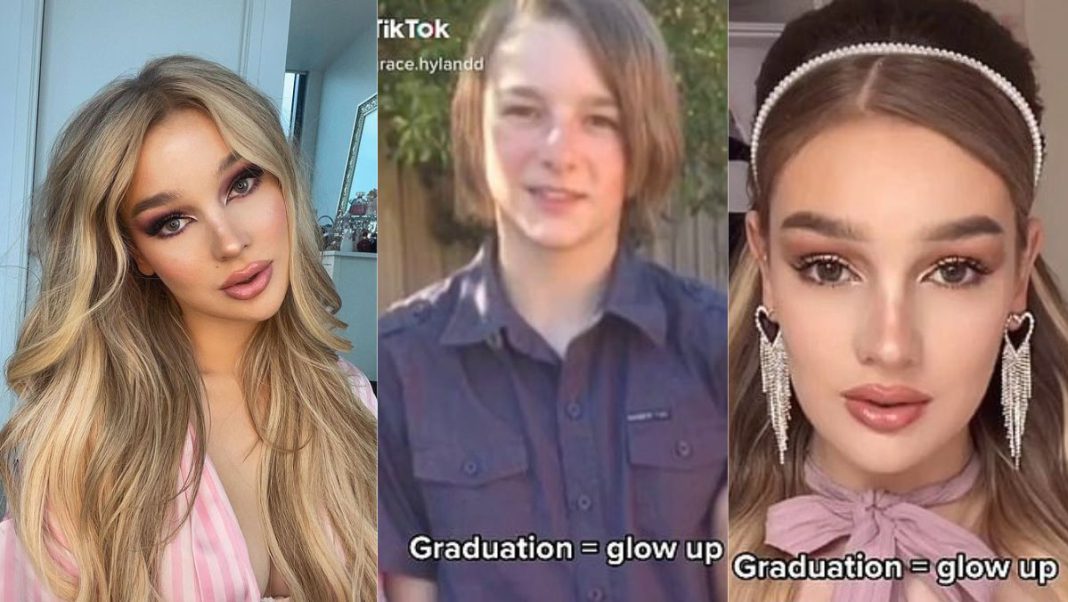 The transgender daughter of Home and Away actor Mat Stevenson hit back at a troll on TikTok who called her a “guy.”

Grace Hyland, 20, who began her gender transition at the age of 12 and was born male, recorded a video on Sunday in reaction to the comment, “Bro, she’s a dude.”

The video shows a makeup-free Grace lip-syncing to a voiceover that says, “You are not on my level.”

Grace, who has 576,000 followers on TikTok, started the video with her hair pulled back into two buns and was dressed in a grey zip-up hoodie and big pink sunglasses.

The video then cut to footage of the social media celebrity sporting elaborate makeup and blow-dried hair while wearing a Calvin Klein bra.

One of Grace’s followers commented: “All I see is a gorgeous looking woman.” Grace’s supporters were eager to congratulate the transgender activist for her cheeky comeback.

Another person remarked, “When are people going to learn to just leave trans ladies alone?”

Since Grace started identifying as a girl at the age of 12, she has been posting updates on her male to female transition on social media.

Her father Mat Stevenson, who rose to fame as Adam Cameron on the television show Home and Away, has been a strong supporter of his daughter.

On The Sunday Project last year, he talked about Grace’s transition and shared the reactions of his friends to discovering of his child’s gender identification.

While some of his pals were “very seamless” and “got it,” he claimed that some of his friends were having trouble, and he begged them to just “show some empathy.”

Grace claimed she started transitioning at the age of 12, although she had known she was intended to be a woman since she was “four or five.”

Before beginning any physical therapy, she sought the advice of medical professionals for a year, as well as psychologists and other experts.

As she explained, “I came out at 12 and went through a gradual transition until I was 14 to grow my hair out, to have my name change worked out, and to sort out my blockers.”

When I was 14, I started fully appearing as Grace in public and at school, she continued.

Grace claimed that without her father’s help, she would not be where she is now.

With the comment that he didn’t want his daughter to “become one of those numbers,” Mat also brought up the startling suicide rate among transgender kids.

Grace has now started advocating for transgender rights and educating others online.