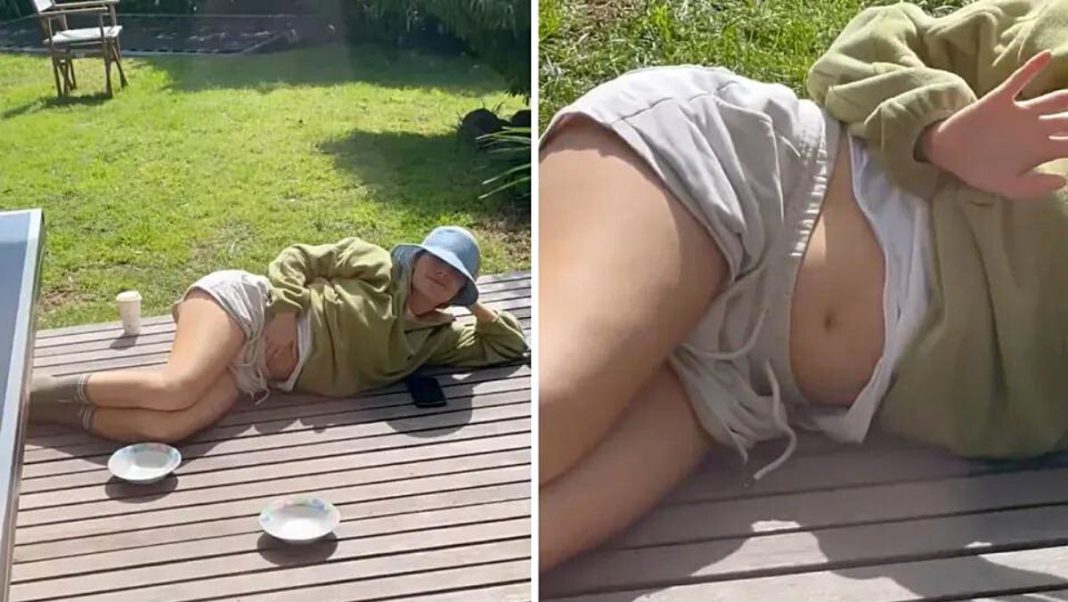 After Jordie participated on Survivor against Sam’s brother Alex, the couple started dating in the beginning of this year.

Sam was captured in a cute Instagram video that Jordie posted. The video begins outside with their three dogs, then tilts up to show the actress resting on her side.

She looks relaxed in a blue bucket hat and green sweater, which is hiked up to show off her belly.

Sam waves to the camera before Jordie zooms in, with ‘Hello belly’ written on top. The Bachelorstar places her hand on her stomach, before pulling her shirt down to cover it up.

Together, they recently supported former Home and Away actress Sarah Roberts by attending the Wog Boys movie premiere in Melbourne.

“The Wog Boys premiere honours our lovely friend Sarah Roberts. You’ll be giggling the entire time with this entertaining and humorous movie. Loved seeing my girl on the big screen, glowing bright! Couldn’t be prouder, she wrote in the description of an Instagram photo.

“Absolutely love following your love story. Loved you on Home and Away and absolutely loved watching Jordie on Survivor. Dream team,” one person gushed.

“You look absolutely beautiful. So happy and glowing,” a second added.

“Great photos and stunning as always, we need you back on Home and Away,” a third chimed in.

Following the star’s disclosure of her “difficult” pregnancy, this has happened.

The former Bachelorette published an essay titled “Before 12 weeks” on her website Believe by Sam Frost in an effort to start a discussion around mental health, social media, and pregnancy.

She told her supporters, “I have to admit, the first trimester was really challenging for me, both mentally and physically. I did not anticipate how difficult being pregnant would be on my mental health.

The celebrity described the pregnancy symptoms that have troubled her, claiming that for two months she has practically been “bedridden.”

Sam was ‘throwing up constantly’, and felt guilty after having to stop working sooner than the couple had hoped.

With her fiancé Jordie for support, she was able to focus on getting well while he took care of everything else.

At 15 weeks along, the celebrity claims her attention has now been drawn to other women who don’t enjoy the same ‘privileged status’ as her.

“When I was going through the worst of it, I felt so alone, so I composed this. Pregnancy is glamorised on social media. Nobody discusses the unpleasant truth… The first trimester can be mentally and physically taxing for some people, she noted.

She wasn’t asking for “sympathy or attention,” Sam continued. Instead, she wants to ensure that those who are experiencing mental health problems get assistance.