Coronation Street spoilers for next week 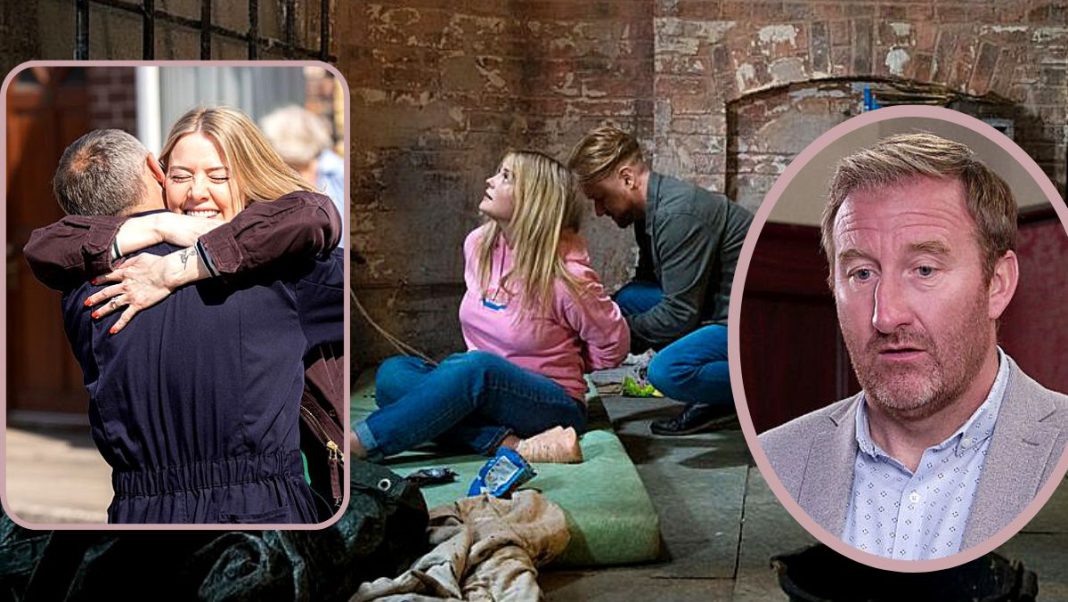 What’s next on the cobbles?

On Coronation Street the following week, Kelly is kidnapped, and Gary is given a ransom demand.

Yasmeen tries to assist Stu in finding his daughter, but Phill won’t give up on Fiz.
The complete list of 12 major events is provided below.

Kidnapper Kieron has Kelly imprisoned in a cellar and makes it obvious that he wants the remainder of Rick’s money.

From Kelly’s phone, Kieron phones Gary and demands £50,000 if he wants to ever see Kelly alive again.

Ross and Kieron get the £24,000 that Gary has given them, but they are upset because they didn’t get the entire amount that they had wanted. If Gary doesn’t pay up quickly, they threaten to hurt Kelly once more.

Later, Gary enters the dungeon where Kelly is being kept hostage and explains that he tracked Kelly down by placing a tracking device inside the money bag.

Kelly is surprised when she realizes how far Gary is willing to go during the violent brawl that breaks out as Kieron arrives with a crowbar to try to stop the two from leaving.

3. Kelly quizzes Gary on what happened

When Kelly returns home safely, she questions Gary about how he appeared ready to kill Kieron during their confrontation.

Gary, who is visibly shaken, downplays what happened and claims he was only trying to protect her.

4. Aadi gets another chance with Kelly

Following Kelly’s kidnapping ordeal, which prevented her from showing up for their scheduled meeting, Aadi meets up with her.

When Kelly apologizes and says she’d like to try again, Aadi is overjoyed.

5. Aggie stands up to Debbie

Debbie is aware that she might not have enough money to pay Ed’s compensation after he had an unpleasant electric shock while working on a hotel radiator. Ray had terminated the professional indemnity insurance, Debbie informs Ronnie.

Debbie shows up at the hospital with a check after attempting to arrange a private settlement, but Aggie believes that it is insufficient.

Later on in the week, Debbie attempts to reach a second agreement by promising Ed £30,000 in restitution. Aggie advises her she only has two weeks to make the payment.

Wendy tells Abi about her relationship with Ken in the past. Abi promises to divert Tracy for a bit while encouraging her to make amends with Ken.

When Ken finally sees Wendy again, he is astounded, but their talk is cut short when Tracy returns home. Tracy is prepared for another argument with Wendy, but will Ken defend his ex-girlfriend?

7. Phill refuses to give up on Fiz

Phill finds it intriguing that Fiz has a thing for a soldier. He visits the factory dressed as Richard Gere from An Officer and a Gentleman, still trying to get her back.

Phill hurts his back trying to lift Fiz up and winds up in the hospital. Phill makes a commitment to sign the annulment documents after realizing that he won’t go any closer to courting Fiz.

When Phill decides to alter his mind once more and asks Fiz to attend a couple’s therapy session, Fiz is shocked. The therapist ends up being the same one that Fiz and Tyrone are seeing, which just adds to the difficulty of the situation.

Fiz and Tyrone’s fabrications and dishonesty don’t win over the therapist. When Phill remembers his phone and returns to the therapist to get it just as Fiz and Tyrone enter the room, the absurd situation appears to be about to come to a head.

Dylan, Sean’s son, is eventually introduced to Frank, but it quickly becomes apparent that they don’t get along. Todd notices Frank is uncomfortable as the awkward situation plays out.

Later on in the week, Sean persuades Frank to go with him to see Dylan play football. Frank concurs, although he is not happy about having to exert effort with the young youngster.

10. Audrey gets a surprise

When Audrey’s family surprises her with a birthday dinner, she is unenthusiastic. The Platts continue to surprise everyone by stating that they have a rental deal with Debbie and that Audrey will once again own the former salon.

Gail later contacts Audrey to see how she is doing. Audrey is currently resting in a hospital bed, but she keeps Gail in the dark.

Stu remembers a few previous family gatherings. Yasmeen pushes Stu to find his daughter since she realizes how much Stu is struggling with not being able to connect with her.

Kevin declines to assist Jack with his leavers’ presentation speech since he doesn’t have time while getting ready for Abi’s most recent visit with Alfie. Jack can’t help but feel excluded.

Later, Abi and Alfie show up, and they announce that they should be able to return to their house together permanently the next week. Kevin is overjoyed that his family is now making progress.